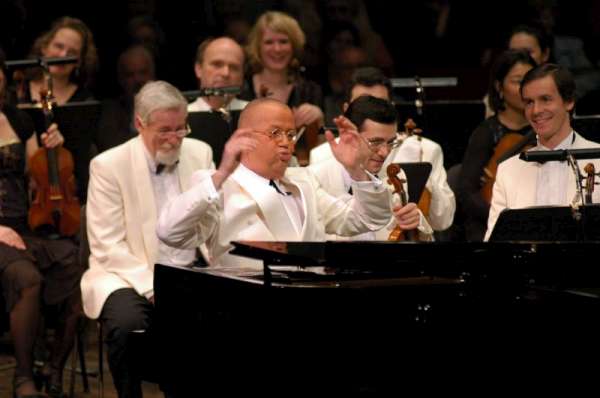 A full evening's entertainment lasting two hours, including a break, and is performed at concert halls. This show features a lot of music, humour and interaction between entertainer, orchestra members and audience. It is suitable for connoisseurs, but also non- musical experts. A blend of classical masterpieces and well-known melodies. The "Liberg Symphony", or "Symphony Libergique", can be performed in Dutch, English, German and French, or even a combination of these languages.
With his motto 'Sophisticated Entertainment', entertainer and keyboard virtuoso Hans Liberg has performed in fully-booked venues all over Europe. In his solo performances, Liberg mainly accompanies himself on a grand piano and other instruments, in addition to home-made orchestra excerpts on tape.
For the "Liberg Symphony", or "Symphony Libergique" the orchestra serves as a band to support Liberg's eccentricities.

Making fun of classical music in the most exclusive sense of the term. The multi-faceted orchestra takes on various forms, from a string quintet to a big band, and from a wind quintet to a percussion group. A mega mix in which Liberg and the orchestra stumble over each other via classical and non-classical excerpts. Together with the orchestra, Liberg recreates the world. The theory that Europe has never been and will never be united in a musical sense, is proved in passing. As can be expected, Liberg begins and ends simultaneously with the orchestra, but everything that happens in between remains a surprise. 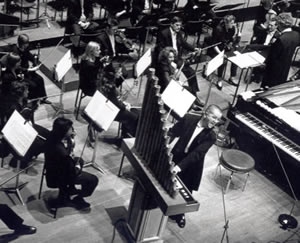 The very first time Hans Liberg performed with an orchestra was on 4 May 1993. This was with the Metropole Orkest, conducted by Dick Bakker, for Queen Beatrix and Prince Claus at the Koninklijk Theater Carré in Amsterdam. During this concert Liberg performed with famous guests, including Emmy Verhey.

Conductor Hartmut Haenchen's invited Liberg to perform at the "Dresdner Musik festspiele 2003", together with Gidon Kremer.